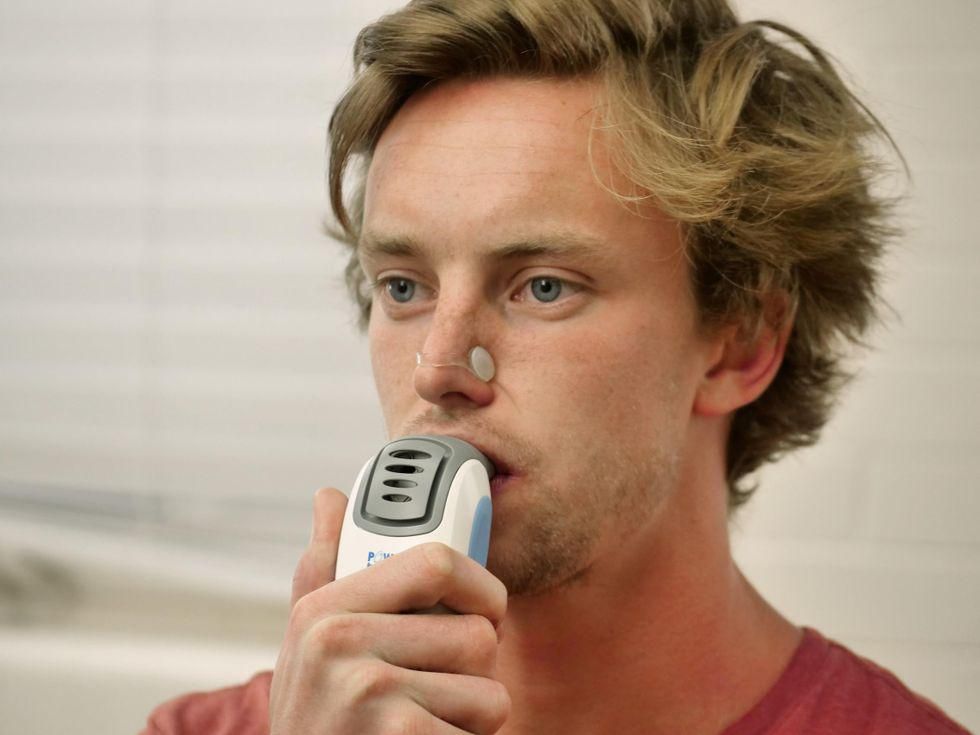 A quick daily "workout" for the breathing muscles may help people lower their blood pressure to a similar degree as exercise or even medication, a small study suggests.

The technique is called inspiratory muscle strength training (IMST), and it involves using a device that provides resistance as the user inhales — essentially working out the diaphragm and other breathing muscles.

And all it took was five minutes of training per day, said lead researcher Daniel Craighead, an assistant research professor at the University of Colorado, Boulder.

There are caveats, he said: Study participants had higher-than-normal blood pressure but were healthy. It's unclear how well the technique would work for people in poorer health.

There's also the question of how long the benefits last, Craighead said, though this study turned up some encouraging results. Even after the training ended, most of the blood pressure reductions were sustained for another six weeks.

That hints there is "something special" about the breathing exercises, according to Craighead. "We're excited to study it further," he added.

The findings were recently published online in the Journal of the American Heart Association.

Inspiratory muscle strength training has been studied for lung conditions like asthma and emphysema and for boosting athletic endurance, according to Craighead, who uses the technique in his own marathon training.

But a recent trial found that for people with sleep apnea — a nighttime breathing disorder — IMST also lowered blood pressure.

So Craighead's team wanted to see whether the training could help people whose only health issue was elevated blood pressure.

The study — which was funded by the U.S. National Institutes of Health and the American Heart Association (AHA) — involved 36 adults aged 50 to 79. All had above-normal systolic blood pressure (higher than 120 mm Hg). Systolic pressure is the force your blood exerts against artery walls when your heart beats.

The researchers randomly assigned participants to one of two groups: In one, participants used a hand-held device that provides resistance during inhalation — similar to trying to suck through a tube that sucks back.

The other group performed a "sham" version of the exercise, using a device that provided little resistance.

"It's not relaxing, like slow deep breathing," Craighead said of the real training. "It's more like exercise."

Luckily, it's a brief workout — 30 inhalations, or about 5 minutes, per day.

After six weeks, the study found, people in the IMST group saw their systolic blood pressure drop from an average of 135 mm Hg to 126 mm Hg.

The improvement is on par with medication, according to Craighead, and even better than what's typical with exercise.

No one, however, is saying that people should dump their current prescriptions and buy an IMST device.

It "would not be wise" to simply stop taking blood pressure medications or exercising, said Dr. Karen Griffin, chairwoman of the AHA's hypertension council.

She said the findings raise the possibility that IMST could bring added benefits, and even allow some people to take less medication. But Griffin agreed that further study is needed to see whether the exercises are as helpful for people with co-existing conditions like heart disease and diabetes.

As for why IMST helps lower blood pressure, it's not yet clear, Craighead said.

But study participants in the IMST group showed certain measurable changes: an increase in nitric oxide, a chemical that helps dilate arteries, plus a decrease in C-reactive protein, a marker of inflammation in the blood vessels.

People interested in trying IMST for their high blood pressure should talk to their doctor first, according to Griffin.

"It's always prudent to check with your physician," she said, "although I suspect most healthy individuals would be able to add this to their daily routine without any significant health risk."

Craighead said he does not necessarily see IMST as a replacement for whole-body exercise.

"If you can exercise, do it," he said. "Exercise has many benefits other than blood pressure control."

But, he added, IMST might be particularly helpful for people who can't exercise because of health problems or injuries, or who lack safe places for exercise.

The devices do require a financial investment: The product used in this study, the POWERbreathe K3 trainer, costs about $430, according to the manufacturer's website.

The U.S. Centers for Disease Control and Prevention has advice on preventing and treating high blood pressure.