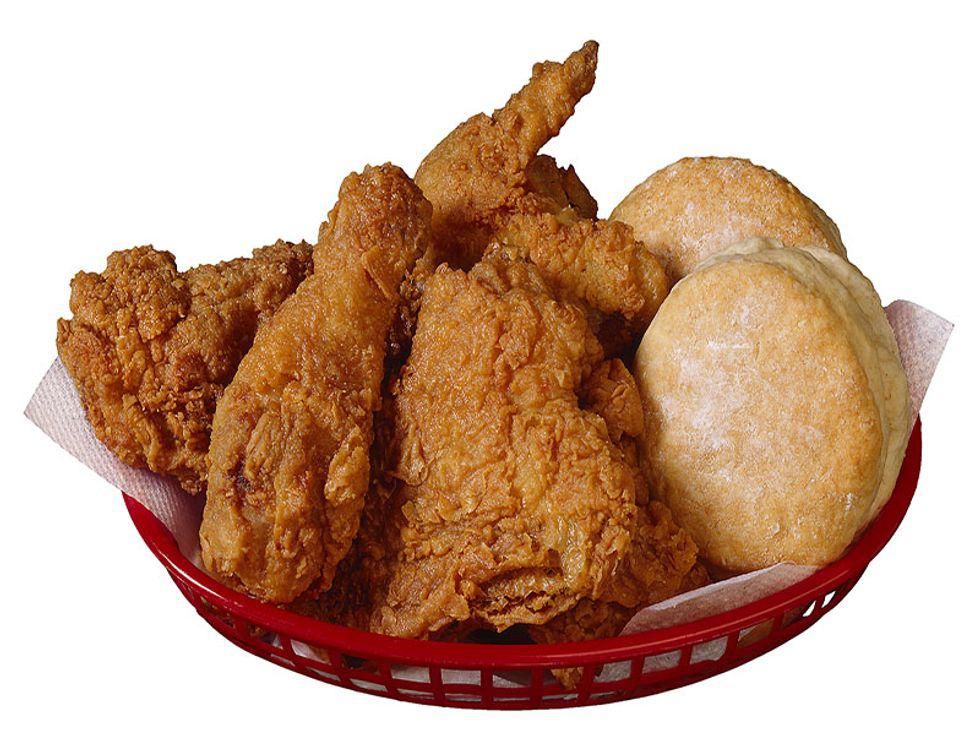 Planning to celebrate the Fourth of July with a traditional Southern-style spread of fried chicken, pork rinds, buttermilk biscuits and sweet tea?

Don't make it an everyday habit.

These staples of a regional diet heavy in fried foods, fats and sugary drinks may boost your odds for sudden cardiac death, a new study warns.

The good news: You might be able to lower that risk by sticking to the Mediterranean diet, an eating regimen rich in vegetables, fruits, fish, whole grains and legumes, and low in meat and dairy.

"Diet is a modifiable risk factor — it is something you can do something about," said lead author James Shikany. He is associate director for research in the division of preventive medicine at the University of Alabama at Birmingham. "So switching as much as possible to more of a Mediterranean-style diet may be beneficial to prevent sudden cardiac death, and for cardiovascular health in general."

The new study doesn't prove a Southern-style diet causes an increase in sudden cardiac death, he noted, only that it is linked with an increased risk.

"We do the analyses as rigorously as possible, but you can never say for sure that's what was responsible. But we're as sure as we can be in an observational setting," Shikany said.

His team collected data on more than 21,000 participants in a study of regional and racial differences in causes of stroke. When the study began, participants had no underlying heart disease.

The researchers examined the link between participants' diet and their risk of a sudden loss of heart function, which can be fatal within minutes. Most sudden cardiac deaths are caused by abnormal heart rhythms called arrhythmias.

After an average of nearly 10 years of follow-up, more than 400 sudden cardiac deaths had occurred among the study participants.

And those who most regularly ate a Southern-style diet had a 46% higher risk of sudden cardiac death compared with Americans who did so the least, the study found.

Meanwhile, participants who followed the Mediterranean diet had a 26% lower risk of sudden cardiac death, compared with those who ate the least of these foods.

Sudden cardiac death is not uncommon. In the United States, about one in every eight deaths in 2016 — nearly 367,000 — was the result of it, according to the American Heart Association.

Despite the grim statistics, Shikany knows changing eating habits is hard. His prescription: Gradually shift away from Southern-style choices toward more from the Mediterranean diet.

"When it comes to changing diet, we can't expect a one-size-fits-all approach," he said. "Something that might work in one population may have no relevance in another."

For example, Shikany said, key contributors to diet include whether people have access to fresh fruits and vegetables, and whether can they afford them.

"It is easy to tell people to do this, but do they live in an area where healthy food is available and affordable?" he said.

Samantha Heller, a senior clinical nutritionist at NYU Langone Health in New York City, was unsurprised by the findings. The South is often dubbed the "Stroke Belt" or the "Diabetes Belt," because of the region's high rates of stroke and diabetes, she pointed out.

"Adding sudden cardiac death to the list is most unfortunate, but not surprising," Heller said.

The South is famous for its menus that are rich in fried foods, meats, rich desserts, sugary drinks and high-fat, high-sodium foods, she pointed out. Eating these on a regular basis has been shown to boost the risk for many chronic diseases, Heller said.

"The World Health Organization reports that up to 80% of chronic diseases, such as type 2 diabetes and cardiovascular diseases, are preventable," she said. "Imagine losing a loved one to sudden cardiac death, stroke, high blood pressure or type 2 diabetes, when it is possible their deaths could have been prevented with diet and lifestyle change."

But dietary patterns often have deep cultural roots, and it can be difficult to shift from an unhealthy to a healthy style of eating, she said.

"The question is: How can we, as health professionals, encourage the education, food availability and affordability necessary to impact populations for whom the Southern diet is daily fare?" Heller said. "We need the support and involvement of the food, restaurant and advertising industries to help instill the notion and practice that healthy foods, food preparation and restaurant choices become part of the norm rather than the obscure in all communities."

The findings were published online June 30 in the Journal of the American Heart Association.

To learn more about the Mediterranean diet, visit the American Heart Association.

Women Can Dance Themselves to Better Health After Menopause

More Americans Are Anemic, Changing Diets May Be to Blame

How the Delta Variant Is Changing the U.S. Forecast for COVI...